In our previous post we suggested a powerful but lethal approach to Gamification of uninspiring working environments, particularly in direct sales. The case was academic, but the dice is cast: can we achieve the same results with methods acceptable to all players involved?

First, we have to change our work process into a competition!

You might argue that business processes in sales are already highly competitive. Employees constantly compete against deadlines, goals and even each other.

This is by no means a healthy competition. It’s more like an ancient roman gladiator game.

A well-conceived competition needs a plot. The plot revolves around a bad guy, who should be worth fighting against. And who deserves nothing less than being destroyed and demolished at the end of each game level.

And just who do you think would be a perfect antagonist in an uninspiring work environment? You’re right: it’s the boss! He needs to play an initial role in the game to make things work as desired.

The plot alone won’t do the trick. We need to think of an attractive game mechanics – set of simple rules, how employees can compete against the boss. No need to reinvent the wheel here. We’ll use a simple betting and gambling system.

Since estimating monthly sales volume is already an important part of his responsibilities, the challenge for the boss to estimate next month’s sales for each employee individually. To spice it up, let’s make him bet a small part of his bonus on his predictions.

Being an employee, the bosses bet against you stirs up all kinds of emotions. But here is the deal: if you manage to beat the estimate, you get a part of your bosses’ bonus! That’s right: the boss gets less and you get more! The more you exceed the estimates, the more you win (and more importantly, the more the boss looses).

In all games the players always try to trick the rules. We need to prevent the boss on setting up goals impossible to achieve by the employees. That’s really easy: he is penalized for both overestimating and underestimating the performance. This way he will be motivated to make his estimates as precise as possible. 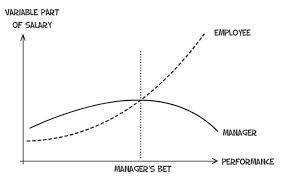 The system can of course be hacked in more ways than described, but the main proposition is clear: Join the employees in the fight against common enemy and they’ll perform better.

Have you ever tried anything similar? Do you have comments, objections? Let us know!